The Lily and the Rose by Jackie French

The Lily and the Rose
Jackie French
Angus and Robertson Publishing, 2018 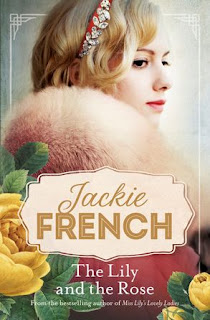 If you haven't read the previous book in this series, you can read my review here.

Sophie Higgs, heiress to the Higgs Corned Beef Empire was a Rose of No Man's Land during the First World War.  She set up and ran successful field hospitals, and even found herself dashing across occupied France in an attempt to stop an attack of mushroom gas against soldiers in Ypres.  Now, the war is over, and Sophie must find a way to return to her normal life-- if life for Sophie can ever be anything like normal again, that is.  When she receives word from Germany that her friend Hannelore, the Prinzessin von Arnenberg and a fellow graduate of Miss Lily's Lovely Ladies, may be in trouble, she resolves to rescue her and take the former Prinzessin, now without lands or income, home with her to Australia.  Accompanied by the wife of an English aristocrat who has a penchant for violence, as well as two of the servants whom she met and befriended at Shillings while living with Miss Lily, Sophie dashes into a Germany which has been irreparably changed by the war, before heading home to Australia to convince her father that she is ready to take over the family business, despite her gender.

I enjoyed reading the next chapter of Sophie's adventures, but at times, the plot of this second novel was a little all over the place.  Rather than being one grand narrative, the sequel follows a number of smaller episodes, and covers themes such as domestic assault, the rise of the labor movement in Australia, women in politics and business, the plight of returned soldiers, and the rise of a new order in Germany.  It's a lot to take in.  I read this novel quickly and eagerly, but did not feel quite the same way as I did when I finished book one.  I think in the future I would be inclined to reread the first book but would perhaps not go on to reread further than that.
Labels: australian book review book review harper collins jackie french miss Lily's Lovely Ladies the lily and the rose