I did it!  I finally made it to ten books in one month!  This is a momentous occasion, and to top it all off, I did it whilst finishing the first semester of my postgraduate studies, with assignments to submit and everything.  I don't know if I watched less television or slept less or learned how to pause time, but I managed it and it feels glorious.

(That being said, I have acquired a lot of books lately, so reading ten of them hasn't totally solved my nuclear proliferation of books.  Sigh.) 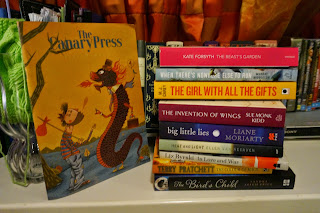 In order of when I read them, here are the books I read in May!

I adored this book.  It was set in an era which I feel particularly drawn to (1929) and it featured vaudeville style magic, romance, and one spectacularly creepy narrator.  I reviewed this book here.

The Colour of Magic by Terry Pratchett

We very sadly lost Mr Pratchett this year but Discworld will live on.  I'm a shamefully recent Discworld convert and I doubt I'll ever read them all but I wanted to pay homage to TP by reading his first Discworld novel this month.  It featured his signature wit and the joy of silliness, but I have to say I enjoyed Mort  and Equal Rites  a lot more.

In Love and War by Liz Byrski

I don't often read memoir (or any non fiction for that matter) but I was drawn to this memoir/ history crossover piece by Liz Byrski, who is a West Australian writer I rather admire.  Byrski's very balanced approach to uncovering more than just the surface mythology surrounding the East Grinstead Guinea Pigs (men who had drastic plastic surgery after being injured in the Second World War) proves why she is so revered as a writer.  It's just a cracking good read, so please pick up a copy.  I reviewed it here.

I'm trying to read a lot more literary magazines, starting with the issues I already own, because to read them and understand them is to be up to date with what's new and innovative in the world of short fiction.  I really enjoy short fiction and this issue of The Canary Press features some of the best short fiction writers currently working in Australia, including Maxine Beneba Clarke, Ryan O'Neill and Ruth Wyer (who I've had the pleasure of meeting and she is delightful.)  This issue also does something really neat, which is take short stories written by eight year olds and reimagine them into stories for adults... that's actually an exercise I would love to try so I might be sending my cousins some emails!

You might have heard of this book because it's been shortlisted for so many awards lately, and deservedly so!  This is a book which uses various short forms of prose fiction to explore issues of culture and identity through the eyes of a series of Aboriginal characters from Queensland.  It features an extremely imaginative example of a future Australia where political correctness has gone horribly wrong which is so funny and so horrifying at the same time.  The book also explores gender identity and queer identity in a way that is really stunning and though provoking and I was so amazed by this wonderful book.  Thanks to Sophie for the recommendation!

This was my book club book.  (Yes, I joined a book club because clearly I don't read enough...)  I never expected to read Liane Moriarty, because I thought it just wouldn't be my thing, but everything I've ever heard about her work is true.  She's so funny and she gets the details of these characters just right so you feel like you've met them.  The story follows the lead up to a school quiz night where a parent is killed and has you guessing which parent it might be and who the murderer is, but it's not a typical crime/ thriller because the social interactions and the multiple points of view really come into play at centre stage.  Unfortunately, the book has to shine a light on a really ugly side of modern society, and that is the cliquey horrible ways people still behave towards one another for the most trivial of reasons, but it's such a clever, entertaining book and I 100% understand why this book is a best seller.  There were a few bits of the ending that I thought came a little out of nowhere but they weren't big enough reasons to write off the book!  It just wasn't how I would have written it.  The peril of reading as a writer, I suppose!

The Invention of Wings by Sue Monk Kidd

I've had this one on my shelf for a shamefully long time, and I keep preventing myself from culling it so this month I decided it was time to read it, once and for all.  It was a quick read, and quite lovely, rating somewhere between The Help and To Kill a Mockingbird on the scale of tone and themes.  I don't have a lot to say about this one, and I probably wouldn't reread it, but it was nice to travel somewhere a bit different in my historical fiction readings, and Sue Monk Kidd's approach to giving voice to real historical characters who have been semi-forgotten by history is really admirable.  I think a lot of people would really enjoy this book.

The Girl with All the Gifts by MJ Carey

Yes, this is a zombie novel.  Except it's not.  MJ Carey's background is in film and comic book writing, which seems quite obvious once you know it.  I don't want to say much about the book in case I spoil it for you, but I will say it was surprisingly compelling.  This is not my genre at all though, so I don't think I noticed the tropes as much as other readers have.

When there's Nowhere Else to Run by Murray Middleton

This was the Vogel Winner for this year, a collection of short stories about Australians facing situations where they have a choice to make, or they are not given a choice and have to watch the inevitable unfold.  The stories were all very subtle, and I found a few instances where I wasn't 100% sure what I was supposed to know about a character though I often had an inkling.  However, the writing style was great, and his control of language was superb.  The Australian short fiction genre is really experiencing a renaissance so I was super excited to read this one, considering was a coup it was for it to win the Vogel, which usually goes to a novelist.   One thing I will say is that these stories all had open endings or were more about moments of truth than resolutions to problems, and writing short stories in this way is something I've been criticised for, so I'm both confused and pleased to see an award winner doing this too! 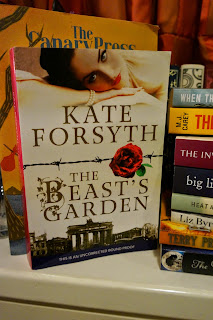 The Beast's Garden by Kate Forsyth

I love Kate Forsyth, I adore her writing, and probably one of the worst things that has happened in my sad, sheltered young life was that I lost my beautiful copy of The Starthorn Tree when we moved house.  Kate's novels for adults are inspired by fairy tales and feminism and all sorts of wonderful things, and her new novel, The Beast's Garden is a recasting of The Singing, Springing Lark set in Nazi Germany.  It follows a young singer named Ava as she is forced to marry a Nazi officer in order to save her father and herself, and her struggle as she tries not to fall in love with him because of what he represents.  There's a lot more to Leo than it seems, and Ava finds herself embroiled in the resistance effort in a lot of ways she never expected.  This book also features of a lot of references to music, as Ava is a singer, and that's rather lovely... I did feel that this novel didn't sweep me away the way that Bitter Greens and The Wild Girl did, and I was disappointed because I miss the magic that I felt with those first two books, but I still thought that this was a great read.  I'm going to blame the fact that Nazi Germany and World War Two are far more common story settings in fiction.  I will also say that Ava and Leo's love story didn't quite convince me.  I didn't feel them falling in love and I think I could have.  But the book was very good and I liked that we were seeing this war from the German resistance's point of view.  It was a clever pairing with the fairytale (which is a variation of Beauty and the Beast.)
Labels: book reviews canary press ellen van neerven kate forsyth liz byrski mj carey murray middleton reading roundup sandra leigh price short story sue monk kidd terry pratchett vogel award