Reading Round Up: February 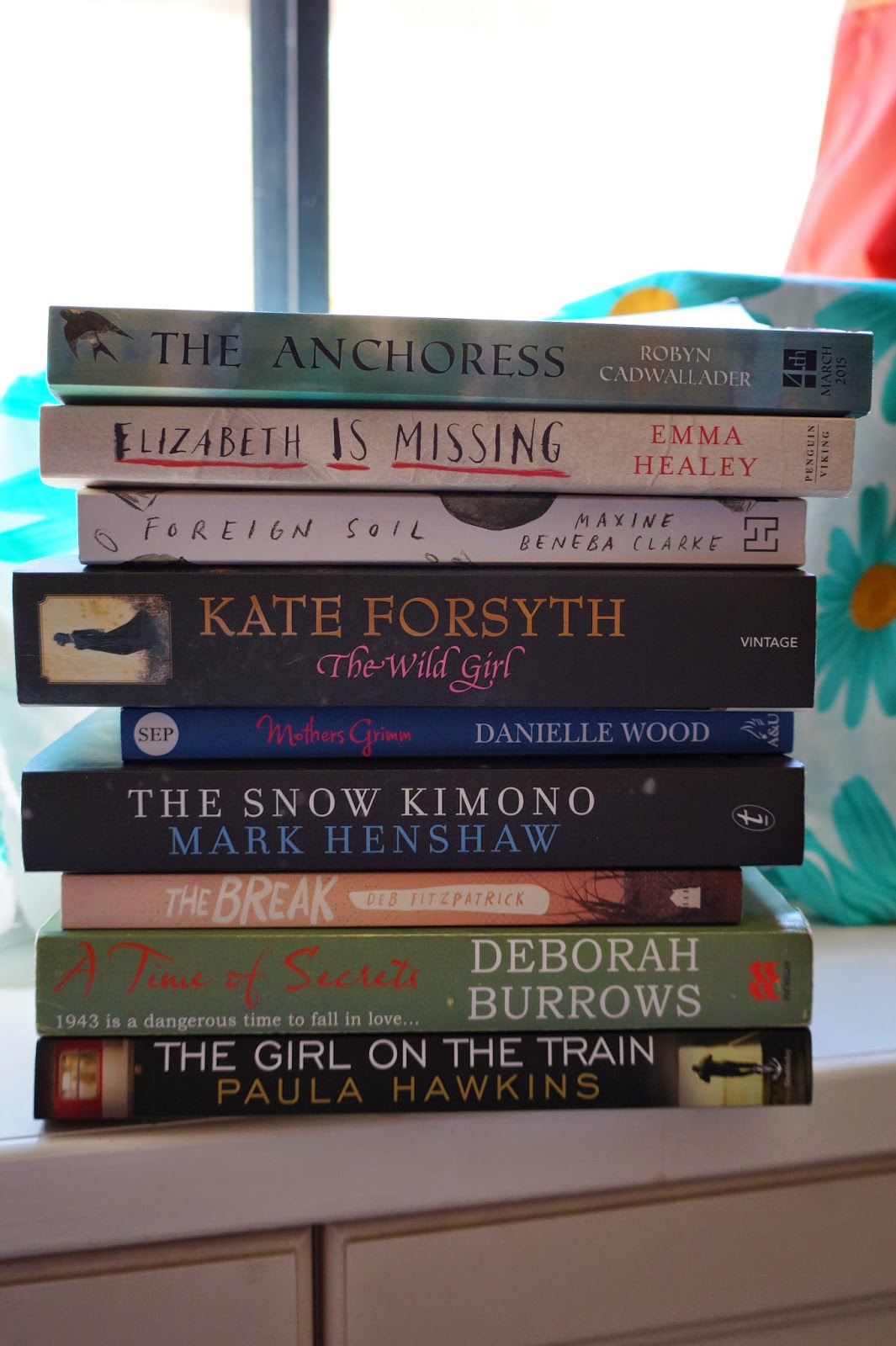 Well, I aimed to read ten books a month, and by the last day of February, I was on my tenth, so I'm almost there.  Not bad for a month with only 28 days!

So much of my reading in February was influenced by events; first by the Perth Writers' Festival, and then by the release and launch of Deborah Burrows' A Time of Secrets, which you can see is the second book I read in February.  Of these books, 8/9 were written by women and 6/9 were written by Australians.  I could probably come up with some other statistics for you all if you wanted, (i.e. 3/9 were historical, 2/9 referenced fairytales and only 1 was short fiction) but we're not here to talk about reading habits.


The Girl on the Train by Paula Hawkins

This year's Gone Girl?  I hope so!  So much more enjoyable than Gone Girl for me, partly because it explored deep issues of abuse and the characters, whilst flawed, had redeeming qualities that made me feel at least some degree of empathy for them.

A Time of Secrets by Deborah Burrows

A novel about wartime, secrecy and love, with a fantastic lead character and a great, well researched plot.  This writer gets better with every book.

The Break by Deb Fitzpatrick

This novel is based on the Gracetown Cliff Collapse tragedy of the early '90s, and provides an interesting meditation on the things we take for granted as modernity catches up on us.  It has an amazing opening line that sucks you right in.

The Snow Kimono by Mark Henshaw

A hard one to summarise without giving too much away, but this is a multiple narrative story about a retired French police inspector, a morally questionable Japanese novelist, and the young daughters they gained and lost, and how.

A Perth Writers' Festival attendee, Danielle Wood's book of novellas is an interesting expose unpacking the expectations we've put onto mothers over time, through the lens of the modern fairytale.  BYO pumpkin carriage.

The Wild Girl by Kate Forsyth

Easily one of the best books I've ever read, this book is romantic, sensory, thrilling and weighty, and nigh on impossible to put down.  Kate Forsyth never disappoints.  This novel tells the story of Dortchen Wild who grew up next door to the Grimm family and from a very young age was in love with Wilhelm, the younger of the Brothers Grimm writing duo.  But it wasn't until they were in their late 30s that they married.  What kept them apart?  And what role did young village women have in the creation of the iconic collection of folk tales?  And what the heck does Napoleon have to do with all this?  Forsyth tells a story of love, but also of two brothers and their efforts to resist French cultural imperialism, as Napoleon marched across Europe, destroying everything in his way.  A fundamentally feminist interpretation, Forsyth gives agency to the young women who played an integral role in this but have been largely unattributed throughout history, most notably Dortchen Wild.  This book has been created through extensive research and the author writes a fascinating note on her interpretation in the acknowledgements.  This book was a 5/5 read.

A short story collection that has been receiving a lot of media attention lately.  This collection won the Victorian Premier's Award for an unpublished manuscript, and thank heavens for that, because by all accounts, otherwise no one would have published it perhaps.  It is politically charged and incorporates the voices of disenfranchised and pissed off migrants and people of colour from all around the world in authentic voices.  The author employs the use of dialect, which can sometimes be hard to understand but is part of the overall effect of the piece.  Two short pieces which have a lingering effect are The Sukiyaki Book Club and Gaps in the Hickory.

Elizabeth is Missing by Emma Healey

A different kind of mystery novel, this book is told from the point of view of Maud, who is losing her short term memory because she has dementia.   Due to a series of notes which she leaves herself, she knows her friend Elizabeth is missing and keeps trying to look for her, but this seems to make the people around her annoyed.  She's also started to remember things about an event that happened long ago, but is she mixing up the two disappearances, that of Elizabeth and that of her sister Suki?  A great deal of skill has gone into keeping control of this narrative, and it's a very entertaining read, if a little less complex than perhaps a mystery should be.  A case of character quirks overriding the plot perhaps?  I gave it three stars.

The Anchoress by Robyn Cadwallader

The book Elizabeth Gilbert was raving about!  This is a novel which is set in 1255, and takes place largely in an anchorhold, a room nine paces by seven paces attached to a church.  Inside lives Sarah, a seventeen year old girl who has committed to being an Anchoress, a holy woman who goes through a kind of living death.  But for a book about a woman who cannot leave her cell, a heck of a lot goes on.  We discover much about Sarah, and her reasons for choosing this life, a lot of it through her interactions with the village women she counsels and the two maids she employs, but also through her memories and her visions.  This was a stunning novel.  Four and a half stars.

Well!  That's all the books I completed in February!  Studies are emerging now that say people who read are less likely to be stressed, perhaps because reading is a form of avoiding thinking about the things that stress us out, but I don't think these statistics take into account the mental states of people who also WRITE books.  Sure, take my heart rate while reading a lovely book, but take it again after I've been staring at a blinking cursor for an hour and forty five minutes and you might get a different story.  Still, I think one of the reading themes I have uncovered this month is the value of a good story, whether is be one that is told to us, or one that we read ourselves.  Narrative structure can be comforting, and it helps us make sense of the things that happen to us.  This is why fairy tales often have moral themes to them, such as the good get what they want, and the wicked are punished- these messages encourage children to lead the kinds of lives their parents and elders want for them, and stay out of trouble.  As we grow older, stories also teach us compassion, and how to walk in the shoes of others.  They teach us that nothing is black and white, and readers will identify differently across the same story simply because of the unique experiences they bring to a book.  This, I believe, is a form of magic in itself.